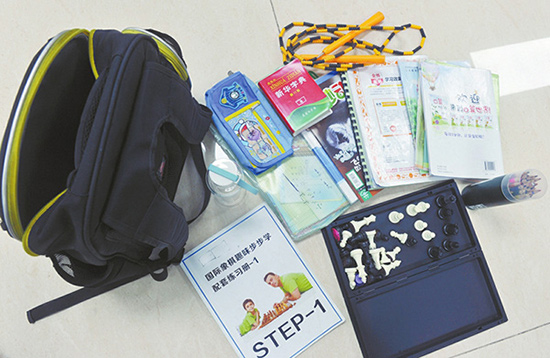 In 2007, a policy was enacted in Chengdu, Sichuan province requiring students’ schoolbags to be lighter than 10 percent of their body weight. However, the average weight of schoolbags in the province doesn't seem to have been measurably reduced since the restriction went into effect. In fact, if anything, the weight of bags has continued to increase.

Taking first-year primary school students as an example, most boys at that age weigh between 20.2 and 26.5 kilograms, and female students weigh between 19.1 and 26 kilograms. Their schoolbags should therefore weigh less than 2.6 kilograms, according to the policy.

On Oct. 24, a primary school in Chengdu’s Jinjiang district was crowded with parents and guardians waiting outside for the children. When the bell was rang and the children emerged, most of these parents took their chidren's schoolbags and put them on their own backs. Among them, a first-year student’s parent complained that the schoolbag was too heavy. The schoolbag weighed 4.2 kilograms. 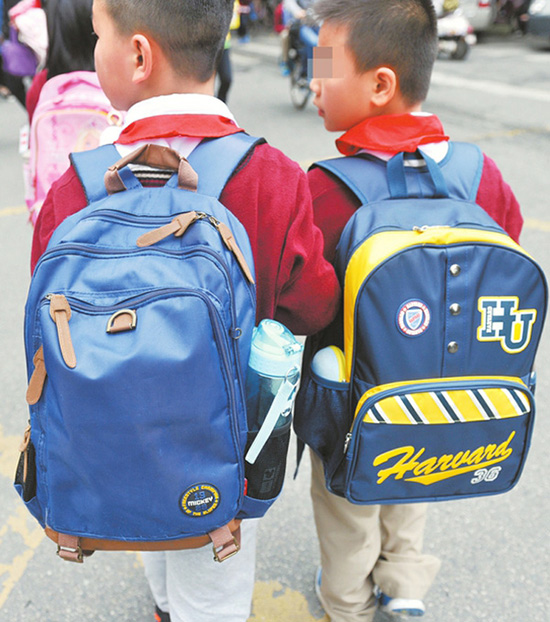 A second-year student, Yuanyuan, had a schoolbag weighing 5.6 kilograms, filled with textbooks, workbooks, exercise books, stationary and a dictionary. His father, surnamed Yang, explained that Yuanyuan participates in extracurricular courses including international chess and soccer. On days when he attends these courses, Yuanyuan’s schoolbag is even heavier, as he has to bring his chess set and a ball.

Based on data from four primary schools, the average weight of schoolbags is 5.1 kilograms. Teachers are aware of the situation, but report that they are helpless to change it. One teacher explained that the quality and size of paper, as well as the quantity of courses students are required to take, raise the weight of schoolbags. Additionally, schoolbags themselves are heavier than they used to be.

To tackle this problem, some schools have offered cabinets for book storage so that students only need to carry home books that are relevant to their homework. However, as the number of students increases, classroom space becomes limited. As a result, most of these cabinets have been removed.

Zhou Gang, deputy headmaster of Jinsha Primary School in Chengdu, recommended that primary schools should raise the quality of in-class education in order to reduce students’ homework load after class. This, Zhou explained, would help to lower the weight of students' schoolbags.