Source：CHINA DAILY Date：2016-09-28 11:03:39Editor：WangPei
First-time visitors to museums in Sichuan province are stunned with a myriad of unusual exhibits.

In the Sanxingdui Museum in Guanghan, 40 kilometers from Chengdu, the Sichuan provincial capital, they are amazed with strange-looking bronze images of humans and birds, and part-human, partanimal masks with oversized and protruding eyes.

Sun Yan, a visitor from Beijing, said: "I wonder if they have been created by aliens."

The exhibits are from the Sanxingdui Ruins, which were accidentally discovered in 1929 by Yan Daocheng, an old local farmer digging a ditch in his field.

Since then, some 10,000 relics that date back 3,000 to 5,000 years have been unearthed. The excavations have yielded what are considered some of the most significant archaeological discoveries in China in the last century.

The discovery of the Sanxingdui Ruins, whose site is believed to have served as the capital of several kings of Shu, offers unshakeable proof that Chinese civilizations have several cradles, including the Yellow River and Yangtze River valleys.

Shu is the ancient name for Sichuan, which is situated in the upper reaches of the Yangtze River.

Visitors to the Jinsha Site Museum in Chengdu are shown around the sunbird gold leaf excavated from the Jinsha Ruins.

Archaeologists hail the Jinsha Ruins as one of Sichuan's most important archaeological finds, after the discovery of Sanxingdui.

On Feb 8, 2001, builders were working at an apartment construction site when suddenly they found ivory and jade ware amid the piles of mud.

Since then, archaeologists have excavated some 10,000 precious relics, including gold, jade, bronze and stone wares, as well as one metric ton of whole elephant tusks and tens of thousands of pottery and ceramic pieces.

The representative artifact from the Jinsha Ruins is the sun-bird gold leaf, with a diameter of 12.5 centimeters, a weight of 20 grams, but with a thickness of only 0.02 centimeter.

The hole in the center of the gold leaf has 12 long "teeth" arranged in the shape of a whirlpool.

The "teeth" symbolize the rays of the sun. Four vivid phoenixes are hollowed out of the gold leaf. The image of birds around the sun suggests the ancient Shu practiced some form of totem worship.

In 2005, the State Administration of Cultural Heritage decided to choose the gold leaf as the symbol of Chinese cultural heritage.

According to Peng Changxin, chief of the administration's general office, the gold leaf's exquisite craftwork and its representation of ancient Chinese people's worship for the sun and the Chinese nation's enterprising spirit account for the decision.

Despite the glorification, visitors would rather believe the gold foil was a work of aliens, for it was impossible for ancients to make something so exquisite when there was no metal, said Hu Xiaorong, a guide in the museum.

Visitors without interest in museums may still know the phrase "land of abundance", which reminds every Chinese of Sichuan. But how that came to be remains a mystery for many.

It was through the Dujiangyan Irrigation Project, 55 km from Chengdu, that Sichuan got the name.

In ancient times, Chengdu Plain, now one of China's most important farming areas, suffered from the incessant summer flooding of Minjiang River, a tributary of the Yangtze River, and was withered with drought in the winter.

Sichuan governor Li Bing decided to harness the Minjiang and started construction of the Dujiangyan Irrigation Project around 256 BC.

He divided the river into two by building a midstream weir. From there, the Minjiang splits into the Outer River, and the Inner River which Li diverted to a new course to the east.

The Inner River was divided at a man-made embankment, where the west stream was linked to the Outer River through the Flying Sands Spillway, and the east stream squeezes through the Precious Bottleneck Channel to feed a grid of irrigation canals, now watering 670,000 hectares in 34 counties in Sichuan, compared with 160,000 hectares of arable land when the project was originally built.

The plain has been more or less spared from flooding and drought for more than 2,000 years, thanks to the project, winning the name the "land of abundance." Included in the United Nations Educational, Scientific and Cultural Organization's list of World Cultural Heritage Sites in the year 2000, Dujiangyan, which works without a dam, is the world's oldest irrigation project still in operation. 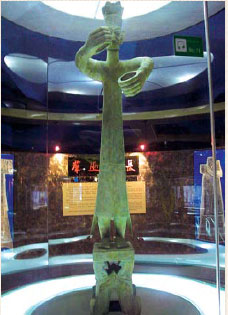 The bizarre bronze man in a standing position is considered a king of the state of Shu.Huang Zhiling / China Daily